The Nuremberg Code: Its importance in Covid-19 times. 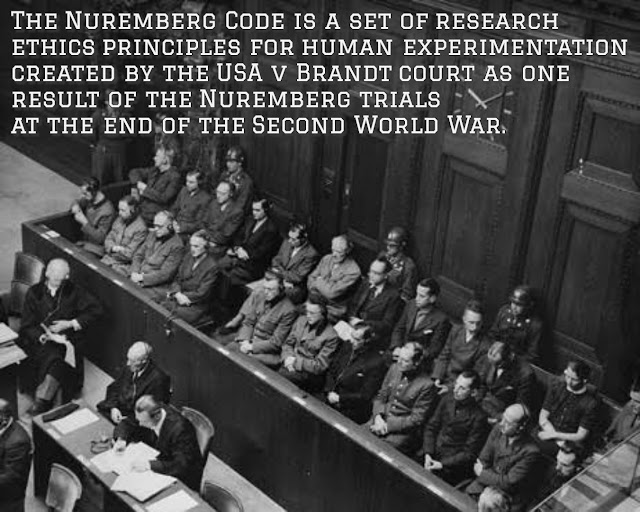 The above Code makes it clear that the doctors and other health care professionals which would claim innocence of the adverse effects of the Covid-19 vaccinations would not be let off the hook, if Nuremberg Code was to be implemented anytime in future. It is personal responsibility of the doctor or the health care provider when he/she tells the patient 'its safe and effective' before injecting the experimental Covid-19 inoculations into the test subjects.
Furthermore, by repeatedly parroting the lie 'its not experimental', the health care professionals are committing a grave crime against humanity. The test subjects never have a chance for informed consent when the experimental nature of the vaccines itself is denied. They were enrolled into the experimentation without their knowledge. Also the private businesses, offices and educational institutions who are coercing the people into entering the mass experimentation will also be accountable if this Code were to be implemented in the future. The Risk/Benefit balance is way out of proportion with risks outweighing the benefits exponentially. These experimental vaccines neither stop transmission nor infection so the benefit is meagre when compared to the risks of blood clots, bleeding, heart inflammation, neurological problems, pregnancy loss and infertility issues it carries along. Its a known fact that any drug or vaccine is studied for at least around 2 years before rejecting or accepting its causal relationship with an adverse effect. How can you (medical community) follow the dictations from health agencies (under big pharma payroll) and declare to the patient "There is no evidence that vaccine has caused the heart attack." Where is your conscience? Where is your common sense? Don't you see an observational relationship between increased heart and blood related issues in the vaccinated people?
We find that the Covid-19 experimental vaccine testing program breaks every single point in the Nuremberg Code. Right now entire world governments seem to be involved in this scam. Those who did not agree to be part of this crime died in suspicious circumstances (assassinated?) But a day might come when all these crimes against humanity would be dug out and the culprits be brought to justice. The day when Nuremberg Code would be implemented and punishments would be publicly carried out- like it happened with the Nazi scientists and doctors. So, dear health care professionals, if not for your conscience or moral calling, at least for the sake of law and for the fear of punishment in the future, stop being agents of this mass experimentation.