June 07, 2021
In January 2021, Saudi's Crown Prince Mohammad Bin Salman announced 'The Line' city project of Neom, which was pretty much a propaganda video promoting the concept of 'Sustainable Development'. The man who was accused of brutally murdering journalist Jamal Khashoggi at Saudi embassy in Istanbul and involved in numerous human rights violations in his kingdom, talks about humanity, environment, 'zero carbon emissions' and what not. At the official website of Neom, they tell us that contemporary cities are unable to cope up with population and pollution, therefore for the sake of 'sustainable development' wherein 'man and environment' can 'coexist' together cities like Neom are necessary.
Saudi Crown Prince announces Line Project in Neom.
Undoubtedly Neom has 'UN Agenda 21' written all over it. The description of Neom exactly fits with that of 'Smart Cities' of Agenda 21 Sustainable Development- a dystopian world where few elites would rule the world using robots, machines, AI and soldiers while common man will be a slave to the digital-technocratic rulers. You will have to take a walk or ride a bicycle in a Smart City, while this idea looks good at the outset, the inner implications are horrifying. In the name of 'carbon emissions' and 'pollution' the common man wont be able to use his cars or any other appliances or machines, unless you get a clearance from the 'government' and if you pay the appropriate taxes. Streets, malls, restaurants and even houses would be under constant tracking and surveillance through Facial and Body recognition through CCTVs, drones, and electronic gadgets like your cell phone an laptops- all in the name of public safety. 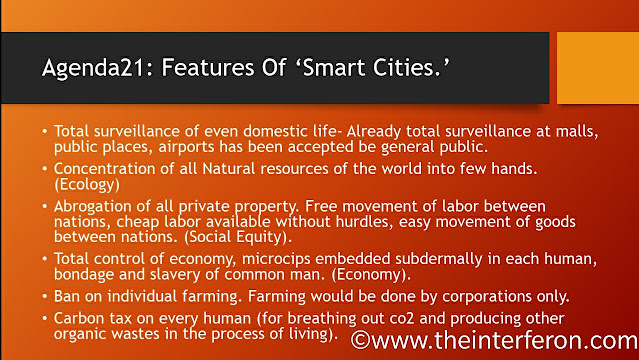 While every detail of a person- including his biometrics, social IDs, bank accounts, medical history will be stored into a chip implanted into the body of the person, the common man would be a hapless insect living at the mercy of his elite masters. This is the real vision of 'Sustainable Development' which people fail to grasp.
Which would be the appropriate place to start and set up such a city other than the most ruthless authoritarian kingdom in the world, Kingdom of Saudi Arabia? Because its almost impossible to launch such a project in any other country of the world. Although the makers of Neom promote it with mesmerizing background music and mind-blowing buzz words, the other side of this project is horrifying.
The real picture of Dystopian Neom.

Few terrifying features of Neom (especially if you love your freedoms, liberties and privacy):

Most of the Muslims are worried about Israel but the equally viscous (if not more) zionist kingdom of Saudi Arabia is often overlooked because of the 'Islamic' image the kingdom projects. Muslims, Christians, Hindus or atheists, anyone who treasure humanity and human values should be looking at Saudi Arabia more keenly.