Illuminati Symbolism of the 'Build Back Better' Slogan.

Leaders of various countries chanting the slogan.
'Build Back Better' is the new slogan of illuminati New World Order puppets who 'act' as Presidents, Prime Ministers and Statesmen of various nations. They supposedly mean to say that post Covid19 pandemic, we all need to built back our world better than before. Is that all? You would be gravely mistaken if you go by their appearances and face values. How come ALL the leaders of important countries in the world chant the same slogan? As if someone is directing them from behind the scenes. We know that Illuminati - Freemasonry puts lot of importance in Symbols, Numbers, Drawings, Carvings etc. Symbolism and numerology have deep rooted origins in the code language of the 'elite'. They speak to us on our faces but we fail to understand their language. 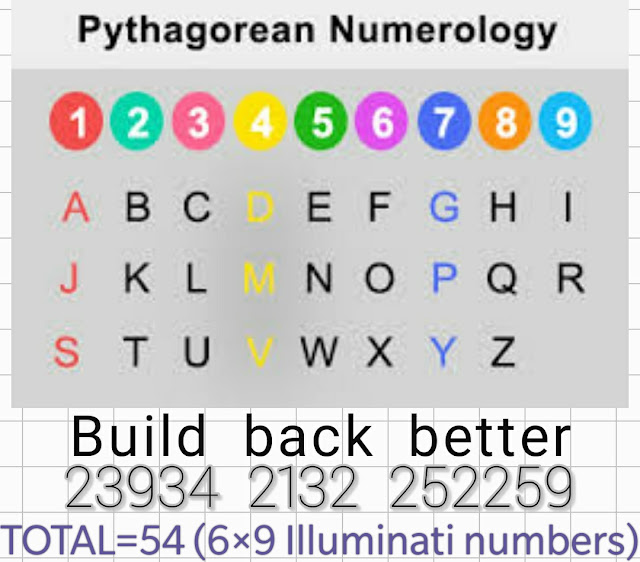 Decoding 'Build Back Better.'
If you decode 'Build Back Better' with the numerology chart and sum up the numbers, you will get a final number of 54- which is 6×9. Both 6 and 9 are very important numbers in the Satanic Freemasonry belief system. Also BBB=2+2+2=6. Most of you know that number 6 is regarded as the number of the beast. Any number which is divisible by number 6 is considered a good number by the 'elite'. And the number 69 fits right into their twisted belief of 'good is bad, bad is good', 'up is down, down is up', 'birth is death, death is birth' kind of nonsense. They believe that by displaying symbols and by repeatedly pronouncing such slogans they can control minds of people. Got to always be observant when all these cult members start chanting same stuff like puppets. Especially notice Hillary Clinton, how happy she appears to be when she chants the slogan and talks about the 'pandemic'.
[Note: For believers of God, all numbers are alike as all are God given. No number can neither harm or profit us without the permission of God. This article is written purely based on beliefs and mindset of the 'elite' cult.]