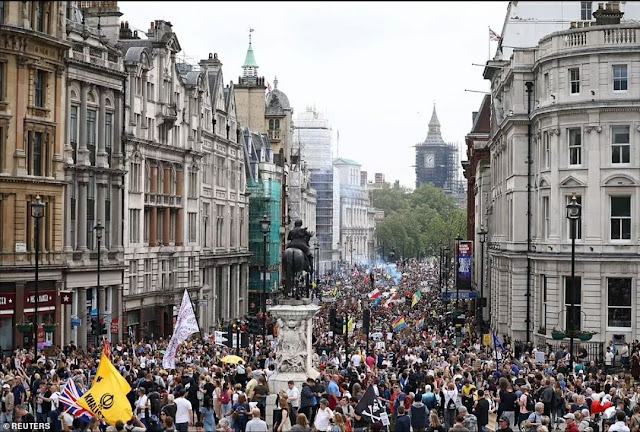 People all over Europe came out on streets on 29/05/2021, flouting the Covid19 pandemic restrictions and demanding for their 'freedom'. Almost all major cities in Europe had demonstrators asking for end of 'Pharma Tyranny' and 'forced medical treatments', especially vaccinations. People asked the authorities to stop fear mongering and lying to the public on behalf of corporate interests.
An ominous silence was conspicuous on part of BBC and other mainstream media. Even though the demonstrators were around a million in London alone, not even a courtesy mention was to be found in mainstream print or web media.
Below of some videos from the 29/05/2021 demonstrations in London and other major cities of Europe.
KIDS ARE NOT LAB RATS.
London
London
London
Palestinian Flag Raised by Protestors.
BBC office under tight security.
Italy
France
Nuns Supporting the Protestors in London.
Switzerland
Palestinian Flag Raised by the Protestors.
Canada
Speech Against Bill Gates.
Canada.
Prague
Venice.
It is indeed worrisome that a demonstration of this magnitude was totally ignored by the mainstream media, obviously raising the question whether mainstream media believes in democracy?